After intruducing our last book hit-list in summer, now it’s time for our absolute favorite reads this winter. Enjoying a good book at the beach or in your garden is great, but cuddling up on the couch with a cozy blanket and a fascinating read while it’s cold and dark outside is even better – it simply wouldn’t be a perfect winter weekend without a few hours spent reading! We’ve collected some real page turners and tearjerkers for you – so, lay down, start reading & enjoy! 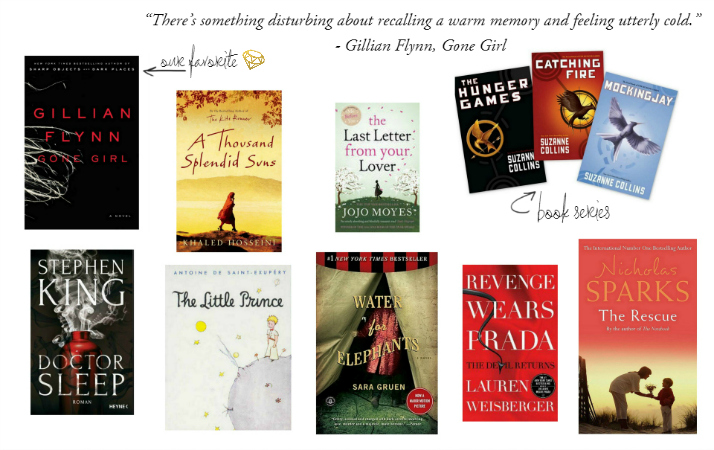 Gone Girl by Gillian Flynn
On a warm summer morning in North Carthage, Missouri, it is Nick and Amy Dunne’s fifth wedding anniversary. Presents are being wrapped and reservations are being made when Nick’s clever and beautiful wife disappears from their rented house on the Mississippi River. Nick isn’t doing himself any favors with cringe-worthy daydreams about the slope and shape of his wife’s head, but passages from Amy’s diary reveal the alpha-girl perfectionist could have put anyone dangerously on edge. Under mounting pressure from the police and the media—as well as Amy’s fiercely doting parents—the town golden boy parades an endless series of lies, deceits, and inappropriate behavior. Nick is oddly evasive, and he’s definitely bitter—but is he really a killer?

A Thousand Splendid Suns by Khaled Hosseini
Mariam is only fifteen when she is sent to Kabul to marry Rasheed. Nearly two decades later, a friendship grows between Mariam and a local teenager, Laila, as strong as the ties between mother and daughter. When the Taliban take over, life becomes a desperate struggle against starvation, brutality and fear. Yet love can move a person to act in unexpected ways, and lead them to overcome the most daunting obstacles with a startling heroism.

The Last Letter From Your Lover by Jojo Moyes
When journalist Ellie looks through her newspaper’s archives for a story, she doesn’t think she’ll find anything of interest. Instead she discovers a letter from 1960, written by a man asking his lover to leave her husband – and Ellie is caught up in the intrigue of a past love affair. Despite, or perhaps because of her own romantic entanglements with a married man. In 1960, Jennifer wakes up in hospital after a car accident. She can’t remember anything – her husband, her friends, who she used to be. And then, when she returns home, she uncovers a hidden letter, and begins to remember the lover she was willing to risk everything for. By the bestselling authour of “Me before you”.

Hunger Games Trilogy by Suzanne Collins
Set in a dark vision of the near future, a terrifying reality TV show is taking place. Twelve boys and twelve girls are forced to appear in a live event called The Hunger Games. There is only one rule: kill or be killed. When sixteen-year-old Katniss Everdeen steps forward to take her younger sister’s place in the games, she sees it as a death sentence. But Katniss has been close to death before. For her, survival is second nature.

Doctor Sleep by Stephen King
On highways across America, a tribe of people called the True Knot travel in search of sustenance. They look harmless—mostly old, lots of polyester, and married to their RVs. But as Dan Torrance knows, and spunky twelve-year-old Abra Stone learns, the True Knot are quasi-immortal, living off the steam that children with the shining produce when they are slowly tortured to death. Haunted by the inhabitants of the Overlook Hotel, where he spent one horrific childhood year, Dan has been drifting for decades, desperate to shed his father’s legacy of despair, alcoholism, and violence. Finally, he settles in a New Hampshire town, an AA community that sustains him, and a job at a nursing home where his remnant shining power provides the crucial final comfort to the dying. Aided by a prescient cat, he becomes “Doctor Sleep.” Then Dan meets the evanescent Abra Stone, and it is her spectacular gift, the brightest shining ever seen, that reignites Dan’s own demons and summons him to a battle for Abra’s soul and survival.

The Little Prince by Antoine De Saint-Exupery
Few stories are as widely read and as universally cherished by children and adults alike as The Little Prince. Richard Howard’s translation of the beloved classic beautifully reflects Saint-Exupéry’s unique and gifted style. Howard, an acclaimed poet and one of the preeminent translators of our time, has excelled in bringing the English text as close as possible to the French, in language, style, and most important, spirit.

Water For Elephants by Sara Gruen
When Jacob Jankowski, recently orphaned and suddenly adrift, jumps onto a passing train, he enters a world of freaks, grifters, and misfits — the Benzini Brothers Most Spectacular Show on Earth — a second-rate travelling circus struggling to survive during the Great Depression, making one-night stands in town after endless town. Jacob, a veterinary student who almost earned his degree, is put in charge of caring for the circus menagerie. It is there that he meets Marlena, the beautiful young star of the equestrian act, who is married to August, the charismatic but twisted animal trainer. He also meets Rosie, an elephant who seems untrainable until he discovers a way to reach her.

Revenge Wears Prady by Lauren Weisberger
Eight years have passed since Andrea “Andy” Sachs quit the job “a million girls would die for” working for Miranda Priestly at Runway Magazine—a dream that turned out to be a nightmare. Now Andy’s on the top of the world: she’s writing and reporting to her heart’s content; running The Plunge, her wildly successful high fashion bridal magazine with Miranda’s other ex-assistant, Emily; and most importantly, getting married to the scion of a storied media family and the love of her life. But- Karma’s a bitch. And Andy’s efforts to build a bright new life have led her directly to the one she fled—and into the path of the Devil herself.

The Rescue by Nicholas Sparks
When confronted by raging fires or deadly accidents, volunteer fireman Taylor McAden feels compelled to take terrifying risks to save lives. But there is one leap of faith Taylor can’t bring himself to make: he can’t fall in love. For all his adult years, Taylor has sought out women who need to be rescued, women he leaves as soon as their crisis is over and the relationship starts to become truly intimate. When a raging storm hits his small Southern town, single mother Denise Holton’s car skids off the road. The young mom is with her four-year-old son Kyle, a boy with severe learning disabilities and for whom she has sacrificed everything. Taylor McAden finds her unconscious and bleeding, but does not find Kyle. When Denise wakes, the chilling truth becomes clear to both of them: Kyle is gone. During the search for Kyle, the connection between Taylor and Denise takes root. Taylor doesn’t know that this rescue will be different from all the others.

Do you have any current favorite reads? Which books do you love most for cozy hours at home? We’d love to know – simply tell us in the comment section below!