To us, a day on the beach without a good read is like Summer without the sun. When we’re on holiday, we could read one book after another and fortunately, there are a lot of good books to choose from. We’ve collected our favorite readings for your next summer vacation, a nice mix between real classics and new books that are on the bestselling lists this summer. We’d love to know – what is on your reading list right now? Feel free to share your favorite books in the comment section below!

Night Train to Lisbon
Written by Pascal Mercier, this novel has been made into a movie due to it’s huge success. Raimund Gregorius, a simple teacher for ancient languages in Bern, has a mysterious encounter with a Portuguese woman, which leads him to an even more mysterious text. In order to understand it’s meaning and finding the authour of the text, Gregorius decides to leave his old life behind and goes to Lisbon, hoping to change his own life through immersing into the one of someone else.

Eat Pray Love
…is a 2006 memoir by American author Elizabeth Gilbert. The memoir chronicles the author’s trip around the world after her divorce and what she discovered during her travels. After separating from her husband and initiating a divorce, she spent four months in Italy, eating and enjoying life (“Eat”), three months in India, finding her spirituality (“Pray”) and ended the year in Bali, Indonesia, looking for “balance” of the two and found love (“Love”) in the form of a Brazilian businessman.

Life of Pi
Life of Pi is a fantasy adventure novel by Yann Martel published in 2001 which was also made into a film last year. Piscine Molitor, the protagonist, grows up in India in the middle of the Zoo of his family. He survives 227 days after a shipwreck while stranded on a lifeboat in the Pacific Ocean with a Bengal tiger named Richard Parker. In 2010 Barack Obama wrote a letter directly to Martel, describing Life of Pi as “an elegant proof of God, and the power of storytelling” – we have nothing more to add to this statement.

The Hundred-Year-Old Man who Climbed Out of the Window and Disappeared
After a long and eventful life, Allan Karlsson ends up in a nursing home, believing it to be his last stop. The only problem is that he’s still in good health, and in one day, he turns 100. A big celebration is in the works, but Allan really isn’t interested (and he’d like a bit more control over his vodka consumption). So he decides to escape. He climbs out the window in his slippers and embarks on a hilarious and entirely unexpected journey, involving, among other surprises, a suitcase stuffed with cash, some unpleasant criminals, a friendly hot-dog stand operator, and an elephant (not to mention a death by elephant). It would be the adventure of a lifetime for anyone else, but Allan has a larger-than-life backstory: Not only has he witnessed some of the most important events of the twentieth century, but he has actually played a key role in them. Starting out in munitions as a boy, he somehow finds himself involved in many of the key explosions of the twentieth century and travels the world, sharing meals and more with everyone from Stalin, Churchill, and Truman to Mao, Franco, and de Gaulle.

The perks of being a wallflower
Charlie is a freshman. And while he’s not the biggest geek in the school, he is by no means popular. Shy, introspective, intelligent beyond his years yet socially awkward, he is a wallflower, caught between trying to live his life and trying to run from it. Charlie is attempting to navigate his way through uncharted territory: the world of first dates and mixed tapes, family dramas and new friends; the world of sex, drugs, and The Rocky Horror Picture Show, when all one requires is that perfect song on that perfect drive to feel infinite. But Charlie can’t stay on the sideline forever. Standing on the fringes of life offers a unique perspective. But there comes a time to see what it looks like from the dance floor.

The white bone
In The White Bone, a novel imagined entirely from the perspective of African elephants, Barbara Gowdy creates a world whole and separate that yet illuminates our own. For years, young Mud and her family have roamed the high grasses, swamps, and deserts of the sub-Sahara. Now the earth is scorched by drought, and the mutilated bodies of family and friends lie scattered on the ground, shot down by ivory hunters. Nothing-not the once familiar terrain, or the age-old rhythms of life, or even memory itself-seems reliable anymore. Yet a slim prophecy of hope is passed on from water hole to water hole: the sacred white bone of legend will point the elephants toward the Safe Place. And so begins a quest through Africa’s vast and perilous plains-until at last the survivors face a decisive trial of loyalty and courage.

Me before you
Lou Clark, brought to life by author Jojo Moyes, knows lots of things. She knows how many footsteps there are between the bus stop and home. She knows she likes working in The Buttered Bun tea shop and she knows she might not love her boyfriend Patrick. What Lou doesn’t know is she’s about to lose her job or that knowing what’s coming is what keeps her sane. Will Traynor knows his motorcycle accident took away his desire to live. He knows everything feels very small and rather joyless now and he knows exactly how he’s going to put a stop to that.What Will doesn’t know is that Lou is about to burst into his world in a riot of colour. And neither of them knows they’re going to change the other for all time.

Dark secrets
Written by Michael Hjorth and Hans Rosenfeldt, this book is a real pageturner and one of the most talked-about crime stories in 2013. It all begins with a call to the police. A sixteen-year-old boy, Roger Eriksson, has gone missing in the town of Västerås. A search is organized and a group of young scouts makes an awful discovery in a marsh: Roger is dead.
Meanwhile, Sebastian Bergman, psychologist, criminal profiler and one of Sweden’s top experts on serial killers, is in Västerås to settle his mother’s estate following her death. Sebastian has withdrawn from police work after the death of his wife and daughter in the 2004 tsunami. When the Crime Investigation Department asks Sebastian for his help in Roger’s case, his arrogant manner at first alienates the rest of the team. Pushing forward, though, they begin to make disturbing discoveries about the private school Roger attended….

The casual vacancy
When Barry Fairweather dies unexpectedly in his early forties, the little town of Pagford is left in shock.
Pagford is, seemingly, an English idyll, with a cobbled market square and an ancient abbey, but what lies behind the pretty facade is a town at war. Rich at war with poor, teenagers at war with their parents, wives at war with their husbands, teachers at war with their pupils… Pagford is not what it first seems. And the empty seat left by Barry on the parish council soon becomes the catalyst for the biggest war the town has yet seen. Who will triumph in an election fraught with passion, duplicity and unexpected revelations?
Blackly comic, thought-provoking and constantly surprising, The Casual Vacancy is J.K. Rowling’s first novel for adults.

To kill a mockingbird
The unforgettable novel of a childhood in a sleepy Southern town and the crisis of conscience that rocked it, To Kill A Mockingbird became both an instant bestseller and a critical success when it was first published in 1960. It went on to win the Pulitzer Prize in 1961 and was later made into an Academy Award-winning film, also a classic.
Now with over 18 million copies in print and translated into forty languages, this regional story by a young Alabama woman claims universal appeal. Harper Lee always considered her book to be a simple love story. Today it is regarded as a masterpiece of American literature. 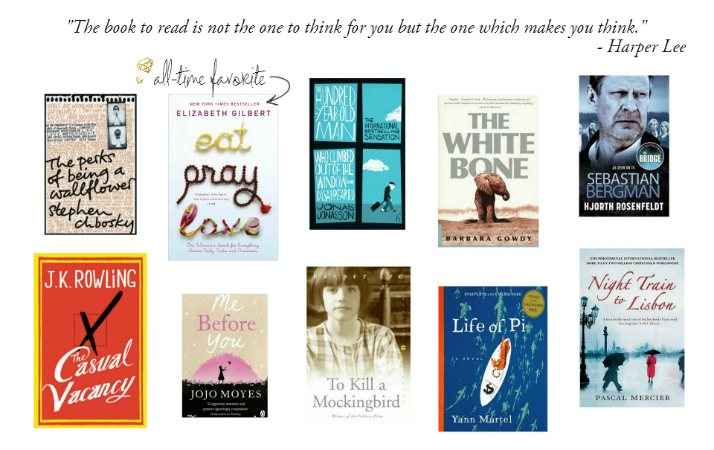 March 22, 2020
what to read while social distancing.
Read more

5 thoughts on “Our Favorite Summer Reads: 10 Books To Pass Your Time On The Beach”